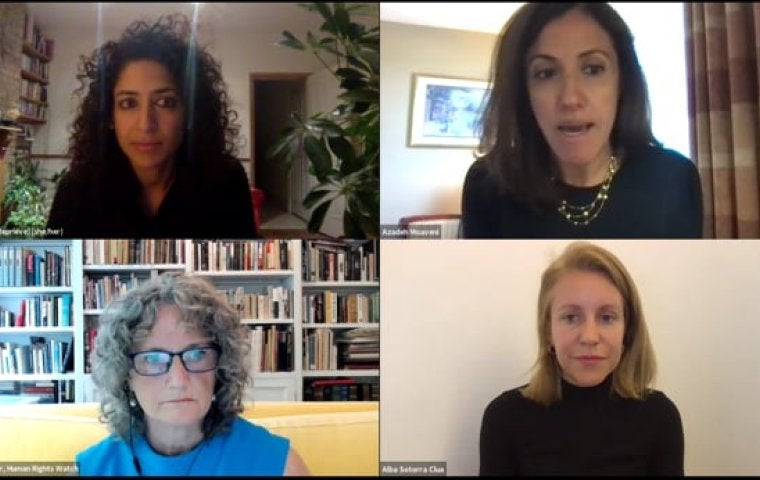 "Countries have a responsibility to keep people safe from harm. As an activist and a staff member of Human Rights Watch, I applaud countries for wanting to keep their people safe, and attacks by Isis are reprehensible. Nobody is saying 'Let's make the world less safe." However, I think it is more dangerous to keep these women and their children in these camps - and the men in their prisons - where they are basically rotting and abandoned by their countries: Women are breaking out, and they are paying traffickers, and most of them just want to get home and rebuild their lives. But the more they are abandoned and ignored by their countries, the more they will become vulnerable - or start thinking twice, about whether or not to join Isis, and the same for their children who know they are abandoned by their home countries." - Letta Tayler, HRW (Excerpt from live discussion.)

About THE RETURN: LIFE AFTER ISIS: Hoda Muthana and Shamima Begum made world headlines after leaving their homes in the US and UK as teenagers to join the extremist group Islamic State, also known as ISIS. The Return: Life After ISIS is a unique portrait of a group of Western women who pledged their lives to ISIS, but now want to return home to restart their lives. While facing hostile journalists and governments who have left them de-facto stateless, the women confront their truths and try to heal from their trauma in a locked camp in northeast Syria, with the help of Kurdish women’s rights activists. With its rare access to Roj camp, this film is a sensitive portrayal of just a few of the 63,000 women and children held, in dire conditions with no due process, as ISIS suspects and family members in northeast Syria by a Kurdish-led armed group.

“This film cuts through the stereotypes about Western women who joined ISIS and makes a compelling case for bringing them home. In the process, it reveals an unusual sisterhood between these women and a Kurdish social worker who helps them even though ISIS sought to destroy her community.” – Letta Tayler, associate director, Crisis and Conflict Division, Human Rights Watch