Lonmin was the company at the heart of the Marikana Massacre of 2012, when 37 striking mineworkers were killed by police. Lonmin has consistently reneged on commitments to provide housing and infrastructure to local people affected by the mine and consistently underpaid workers. Since the 2012 massacre, the living conditions that caused the strike have only gotten worse. Can these two women take on the goliath corporation and high powered enemies that appear to collude against the people of Marikana? 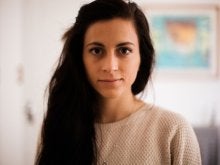 Aliki is a Johannesburg-based South African documentary filmmaker and photographer. After completing her MA cum laude, in 2015 she started her own documentary production company, Elafos Productions to champion women’s stories, recognising the need to emphasise complex and strong roles for women both in front of and behind the lens. Her photojournalism has been featured in Al Jazeera Online, she has lectured at post-graduate symposiums and has been referenced by Pulitzer winner Greg Marinovich in his book Murder on Small Koppie. Aliki is currently heading up the Impact and Advocacy team in the newly formed Sisters Working In Film and Television Organisation. Strike A Rock is Aliki’s first documentary feature film, and was one of six projects chosen to pitch at Bertha's Good Pitch Kenya in 2016