Mujer de Soldado is a deeply moving picture of female solidarity that finally provides space for the dignity of women's experiences that has long been denied. 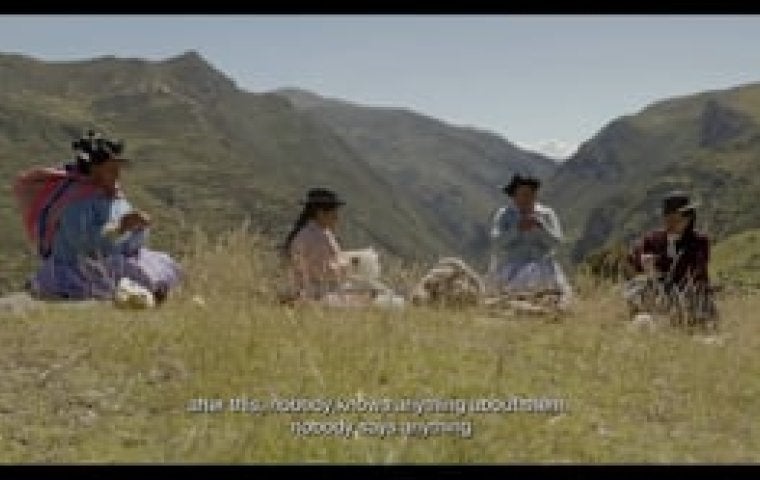 Film description: Magda Surichaqui Cóndor was a teenager when soldiers arrived in her small Peruvian village in 1984. Sent to root out members of the Shining Path, soldiers of the Peruvian army used their sweeping powers to rape and humiliate local women, leaving them shunned by their own communities, often with children in tow. Three decades later, Magda has joined a number of other women in bringing charges against their abusers. With stunning cinematography and respectful intimacy, Patricia Wiesse Risso accompanies Magda and her friends as they reminisce over their youth and their lives since, whilst they sit and chew coca leaves, peeling potatoes and spinning wool. Mujer de Soldado is a deeply moving picture of female solidarity that finally provides space for the dignity of these women's experiences that has long been denied.

“Mujer de Soldado centres the stories of the women who have been silenced for a long time and who continue to be marginalised within their communities and in Peru as a whole.” Jose Miguel Vivanco, Director, Americas Division, Human Rights Watch

Access notes: This film is fully subtitled in English

To learn more on this topic visit HRW.org
Abortion lessons from Latin America

Patricia Wiesse Risso, Social Communicator graduated from the University of Lima. She has worked in various NGOs and development projects, specializing in communication in rural areas, which is why she has traveled throughout Peru, acquiring knowledge about different Peruvian cultures. She has more than thirty years of experience in the areas of video, television, radio and written journalism, training for journalists, project development, program evaluation, script production, article writing and television reporting on social issues, human, cultural and agricultural rights It has developed training and advisory projects for rural residents in the use of the media. Seven years ago, she worked at the Legal Defense Institute, where a different television experience was started, which presented alternative topics to commercial television. Thus, it specializes in the work of reporting on human rights understood in its broadest sense, including social and cultural aspects. During this time he has produced around two hundred television reports and has won five awards She is a member of Buenaletra Producciones SAC where she directed the documentary feature film “Todos Somos Estrellas” which in 2017 received two honorable mentions in the official section of the 21st Lima Film Festival and in the 2017 Ulima Film Festival. At the 8th Cinesuyu Festival de Cine de Cusco, was the winning documentary feature film. Currently she has just finished her second feature film "Soldier's Woman", awarded by DAFO - Minister of Culture of Peru in 2018.