Filmed over five years, I Am Samuel is an intimate portrait of a Kenyan man balancing pressures of family loyalty, love, and safety and questioning the concept of conflicting identities.

This program is co-presented by OUTtv.

Join us for the Netherlands premiere of I Am Samuel. Samuel grew up on a farm in the Kenyan countryside, where tradition is valued above all else. He moves to Nairobi in search of a new life, where he finds belonging in a community of fellow queer men where he meets and falls in love with Alex. Their love thrives even though Kenyan laws criminalize anyone who identifies as LGBTQ, and together they face threats of violence and rejection. Samuel’s father, a preacher at the local church, doesn’t understand why his son is not yet married and Samuel must navigate the very real risk that being truthful to who he is may cost him his family’s acceptance. Filmed over five years, I Am Samuel is an intimate portrait of a Kenyan man balancing pressures of family loyalty, love, and safety and questioning the concept of conflicting identities.

Watch this film at your own pace in the Netherlands anytime between 12-14 February 2021.

You can view a pre-recorded Q&A from with Filmmaker Peter Murimi, Producer Toni Kamau & HRW’s Associate Director in the LGBT Rights program Neela Ghoshal in our “bonus content” section (content available on the streaming platform (available after registration for the film only).

This event is free of charge, but your kind donation to Human Rights Watch makes it possible for us to continue our work in protecting human rights around the world. Please consider donating the cost of your ticket via this link. 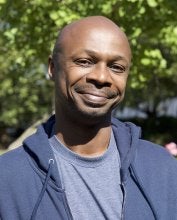 Peter Murimi is a multiple award-winning Kenyan TV documentary director focusing on hard-hitting social issues, from extra-judicial killings to prostitution. He recently won the 2019 Rory Peck award for news feature camerawork. His first win was the CNN Africa Journalist of the year award for his intimate documentary about Female Genital Mutilation among his Kuria community, “Walk to Womanhood” (2004). Another ground-breaking project was the film “Slum Survivors” (2007) which won an award at the Czech Tur Ostrava film festival. Peter was a producer/ director for Al Jazeera's Africa Investigates strand exposing crime and corruption, including "Spell of the Albino" (2011) and "Zimbabwe's Child Exodus" (2011). "Kenya's Enemy Within" (2015), also for Al Jazeera, revealed the terror threat posed by homegrown al Shabaab Somali militants to Kenya. "I am Samuel" is his feature directorial debut, filmed verite style for five years in his home country of Kenya.