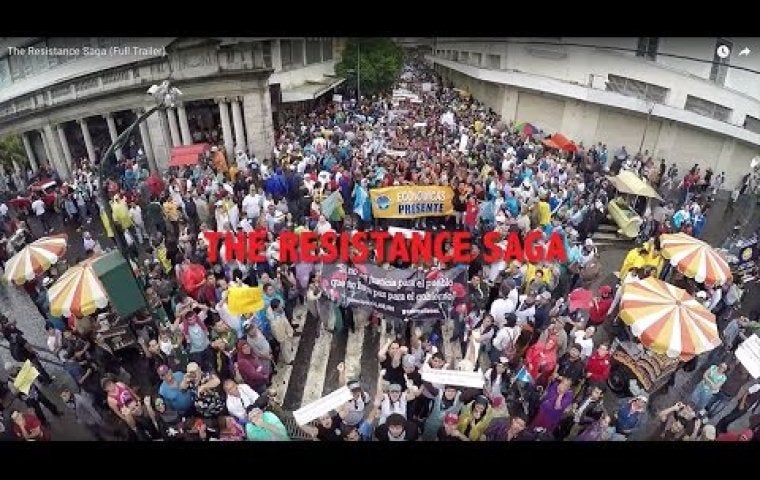 Part political thriller, part memoir, Granito takes us through a haunting tale of genocide and justice that spans four decades, two films, and filmmaker Pamela Yates’s own career. Granito is a story of destinies joined together by Guatemala’s past and of how a documentary film from 1983, When the Mountains Tremble, emerges as an active player in the present by becoming forensic evidence in a genocide case against a military dictator. In an incredible twist of fate, Yates was allowed to shoot the only known footage of the army as it carried out the genocide.

Granito will screen on June 11 as part of The Resistance Saga. The Resistance Saga is a cinematic project designed to galvanize audiences to fight back when society is faced with authoritarianism and demagogues, and celebrate the role that the arts can play in creating, strengthening, and communicating narratives of nonviolent resistance. In so many ways, indigenous peoples throughout the Americas have set the example of long-term courageous and strategic resistance against daunting odds, with a powerful example being the saga of the Mayan people as depicted in director Pamela Yates’ films When the Mountains Tremble, Granito: How to Nail a Dictator and the latest installment, 500 Years: Life in Resistance. The event is a day-long immersive gathering that includes the screening of all three films, with two 15-minute intermissions, followed by a discussion on long-term movement building with the Mayan women protagonists, and a reception and concert by Mayan singer/songwriter Sara Curruchich singing her inspiring songs of resistance.

All three films of the Guatemalan trilogy have premiered at the Sundance Film Festival during the past 35 years. When the Mountains Tremble (1983) introduced indigenous rights leader Rigoberta Menchú as the storyteller in her role to expose repression during Guatemala’s brutal armed conflict. Winner of the Special Jury Award at Sundance, the film was seen worldwide and translated into 10 languages. It helped put Menchú on the world stage and 10 years later she was awarded the Nobel Peace Prize. Yates’ sequel, Granito: How to Nail a Dictator (2011) is a political thriller about the building of a genocide case against Guatemala General Efraín Ríos Montt. The case included outtakes from When the Mountains Tremble as forensic evidence in the prosecution of Montt. The third film, 500 Years: Life in Resistance, picks up where Granito leaves off, providing inside access to the first trial in the history of the Americas to prosecute the genocide of indigenous people. Driven by universal themes of justice, power, and corruption, the film provides a platform for the majority indigenous Mayan population, which is now poised to reimagine their society.